The movement for a library at Monterey began in late 1916, when the late Homer L. Rogers, Pulaski County Superintendent of Schools, mentioned to Elmer Johnson the idea of requesting Carnegie Foundation Grant money for this purpose.

On December 10, 1916, a library board was formed with the Monterey Town Board appointing Dr. A. J. Kelsey as its first member. Soon after five other members, Lenore Bringham (Keitzer), F.A. Keiter, George Langenbahn, Lillian Marbaugh (Johnson) and W.B. Kleckner, were appointed by Judge Pentecost, Judge of the Pulaski Circuit Court.

The library board held its first organized meeting on the evening of January 8, 1917 in one of the member’s homes to discuss plans for a library. Officers were elected and by-laws were framed that night.

On January 11, 1917, Henry N. Sanborn, secretary and state organizer from the Public Library Commission of Indiana arrived in Delong at 11:28 a.m. by Vandalia Railroad. He traveled to Monterey and met with members of the library board regarding the establishment of a library.

In April 1917, the Carnegie Corporation offered the $5,000 donation (the Monterey-Tippecanoe Carnegie Public Library was the smallest unit to have been granted a subsidy for a library building by the Carnegie Foundation) if a deed for the ground could be presented and if a tax for the upkeep of the building could be assured. Land for the building, secured from Dr. William Kelsey, was probably a donation, though the recorded deed states that it was purchased for $250.00.

Samuel A. Craig of Huntington was selected as architect. The library board accepted the architect’s plans at their June 1917 meeting. These plans were immediately submitted to the Carnegie Corporation for approval. Mr. Craig would travel to Monterey from time to time on the morning milk train (Erie) and return that evening by the same mode.

Sealed bids for the building were received August 17, 1917. The lowest bid of $6,220 was reduced to $5,000, or perhaps less, by omitting several items originally listed. Although approval for the grant was given, the secretary of the Carnegie Corporation, Mr. James Bertram, questioned how the library “could get along without complete plumbing, electric wiring and furniture”. The town was without any electricity until about 1921, therefore, the omissions were not as serious as they seemed to Mr. Bertram. The contract was awarded to Master Bros., Monterey, since they were the lowest bidder. The Carnegie Grant proved not to be sufficient to cover all costs and the community raised the remaining sum by subscription.

The September 1918 library board meeting was held in the “New Public Library”. The minutes of the meeting do not indicate to what extent the building was completed. However, the library board accepted applications for the position of Librarian at the October meeting and Mrs. Lena Collins was hired at a salary of $30 per month. The library’s opening date was set for October 16, 1918.

The library’s book collection was started with one book, “The Rose of St. Louis”, which was probably a donation. Dr. A.J. Kelsey did most of the book purchasing. The books were indexed in 1921, periodicals were added in 1922 and “The New Britannica Encyclopedia” was purchased in 1924.

The depression seriously curtailed service in the 1930’s and the library found it difficult to remain open three days a week. Throughout the War years, the services of a librarian were difficult to obtain. For a time the library was only open during evening hours. During the middle 40’s a regular librarian was employed and progress again was evident. The first children’s reading club was held in 1950 and has been held every summer since then.

The Town of Monterey and Tippecanoe Township united into one taxing unit in support of the library in September 1953. Improvements in that decade included modernization of the electric wiring, new lights, water system, septic tank, rest rooms and a railing on the front steps. Many of these had been in the original plans.

In 1974 a new front entrance, including doors, steps, handrails and sidewalks and a new restroom fashioned from the existing two small ones was approved at a cost of $6,549, with the contract for the work being given to Easterday Construction Company, Culver, IN.

With a vision and a dream for future expansion, the property adjacent to the library was purchased in 1986. During this decade, the grounds were totally re-landscaped, new furnace and central air-conditioning systems were installed, videocassettes were added to the collection and a copy machine was purchased.

The 1990’s saw much growth, not only in technology, but also physical expansion. In 1993 the basement was totally remodeled and the upstairs received new carpeting and shelving. A fax machine was purchased in 1994, computers added in 1995, and public Internet access offered in 1996. On April 14, 1998 ground was broken for a $780,000 expansion project. A 3,280 square foot addition was constructed on the south side of the original Carnegie structure, over doubling the facility’s size. A parking lot, new ground floor entrance, elevator, two new accessible restrooms, and program room were all part of the project. New shelving and seating were also added. H. L. Mohler of Lafayette, IN, was the architect and Easterday’s Construction Company of Culver, IN, was the contractor. This project was made possible through the combined use of State and Federal funding sources. The Town of Monterey, on behalf of the library, was awarded a $375,000 Department of Commerce Community Focus Fund Grant and the library received a $47,000 grant and a long-term low interest loan of $358,000 from USA Rural Development. A dedication ceremony was held on October 15, 1999.

Today, the library’s holdings total over 15,000. There are eight computers for public use. CD-ROM’s and DVD’s have been added to the collection. An automation project, including conversion of the card catalog to MARC records, was completed in 2001. The evolve circulation system with a web-based patron access catalog is now in use. 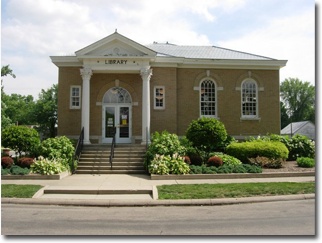